What is a riveter? A riveter is a tool to join metal sheets as a point of weld, and with RiveDrill, you can do it with no effort. RiveDrill is an attachment to set blind rivets with the drill. The adaptor automatically transform the energy of the driller into riveting energy plus self-gripping power from the rivet into the hole in the structure. You install as a drill bit and turning to the right set the rivets and turning to the left expell the mandrel. There are several models. For purchase click HERE.

Máquinas Andrea manunfacture riveters and fasteners since 1966 in Madrid . RiveDrill is manufactured by Máquinas Andrea and is registred brand. Riveting tools as RiveDrill was invented and patented by Andrés Pérez Aniento.

Rivet without effort, no  vibrations ,  no cables

When start the cordless drilling machine, some tools changes. We have developed the riveters RiveDrill, to be used with the drilling machines (not included), to avoid efforts,  vibrations on users, cables, air compress hoses and compresors.

Old manual riveting tools need an operator physical effort  and produce a disgusting vibration at the end moment when the rivet is set. The pneumatic riveting tools have a limited way of action becasue of the length of the hose  for air compress.

Rivet and drill with the same machine

Blind rivets and nut inserts are always setted into the holes. It is very useful to work with the same drilling machine to do the holes and to set the blind rivets or nut inserts.

Manual and pneumatic riveting tools was created for more than 75 years. We currently have left to manufacture manual riveting tools. Pneumatic tools can only be used in determinate fix points of production.

Use RiveDrill instead of Manual riveting tools or rivet gun you will be always gretaful.

The riveters adaptor, RiveDrill, can also been operated by hand with a key in the case that the drill is discharged before finishing the work. 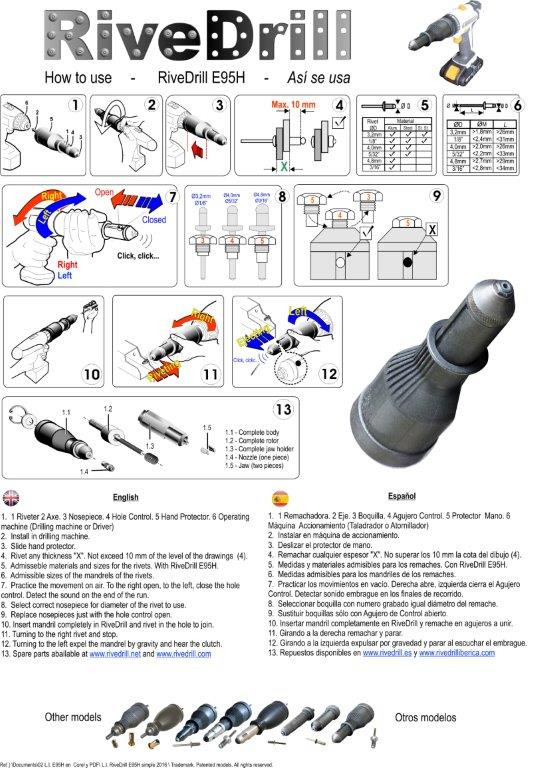